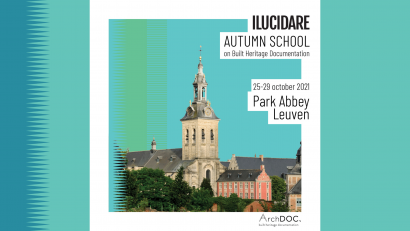 During the week of 25-29 October, the ILUCIDARE training brings together 25 professionals from all over the world in the Park Abbey, a 12th century Norbertine abbey located in the outskirts of the city of Leuven.
The participants are experienced in built heritage documentation and will have the opportunity to share their work among peers and part-take in tech-demos to test the performance of different state-of-the-art tools and techniques in documentation.
The Autumn school provides unique networking opportunities between diverse actors, including internationally recognised experts, emerging professionals, and students.

About ArchDOC
The ArchDOC  Workshop (Architectural Heritage Documentation for Conservation) is part of the Advanced Master of Science in Conservation of Monuments and Sites at the Faculty of Engineering Science of the University of Leuven. The workshop is a learning partnership with several EU and international experts, and is endorsed by The ICOMOS/ISPRS Scientific Committee on Heritage Documentation (CIPA).
ArchDOC is a one-week intensive workshop that provides both a theoretical and hands-on introduction to the highly specialised subject of built heritage documentation. Students gain knowledge and experience in the utility and limits of a variety of surveying and 3D documentation techniques. The workshop focusses on documenting the reality of existing buildings and built heritage sites, which are characterised by complex geometries, different layers of interventions and changes in constructive systems.
The 2021 edition marks the celebration of the 20th anniversary of the ArchDOC workshop.

About Park Abbey
Park Abbey is a Norbertine abbey, located just southeast of the city of Leuven. Buildings have a seventeenth to eighteenth century appearance, but the layout and landscaping of Park Abbey date back to medieval times. Officially, Park Abbey was founded in 1129 by the Duke of Brabant, Duke Godfrey, surnamed "Barbatus" ("the Bearded"). No new buildings were added since 1730. In 2003, the abbey grounds were let to the city of Leuven on a long lease (the Park Abbey Museum).